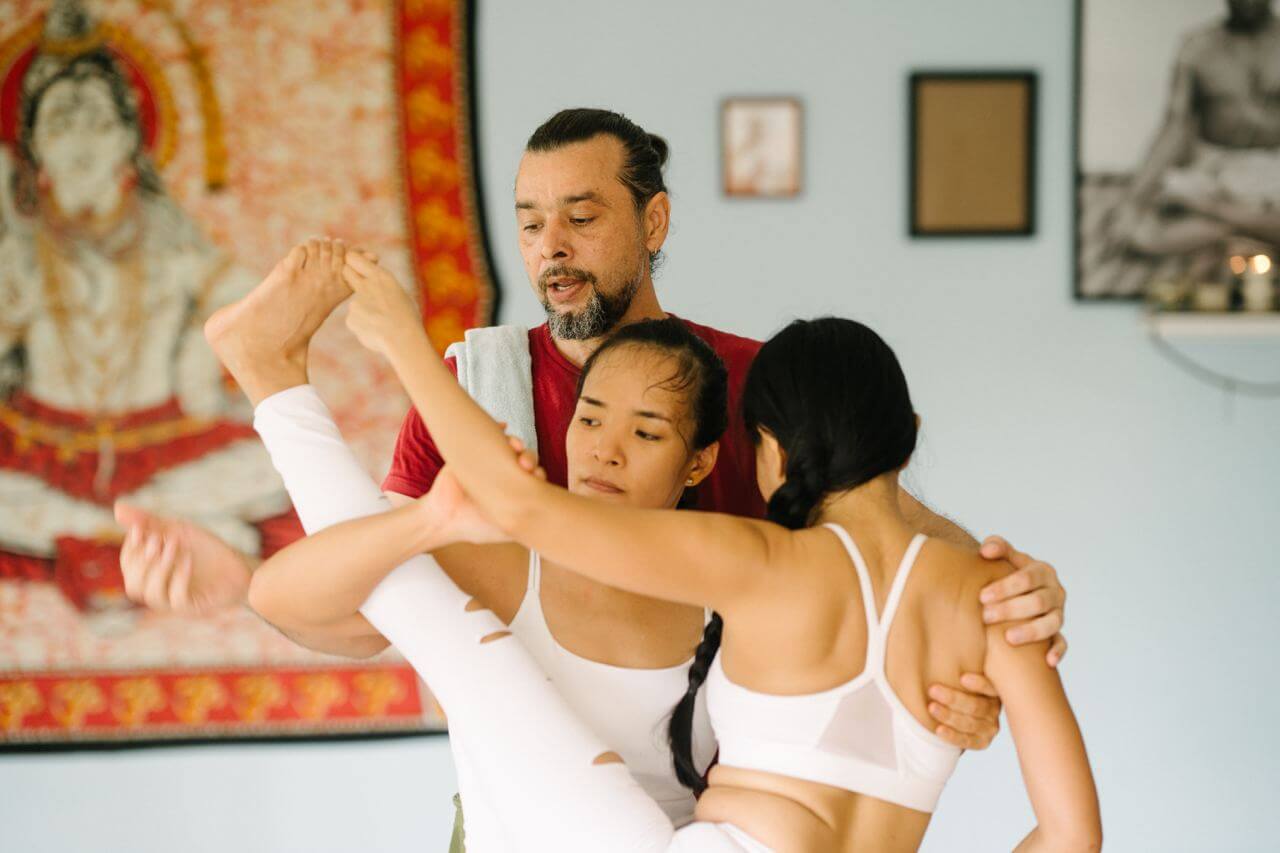 The course is ideal for experienced practitioners who wish to deepen their practice as well as for beginners who is interested to explore Ashtanga Yoga. 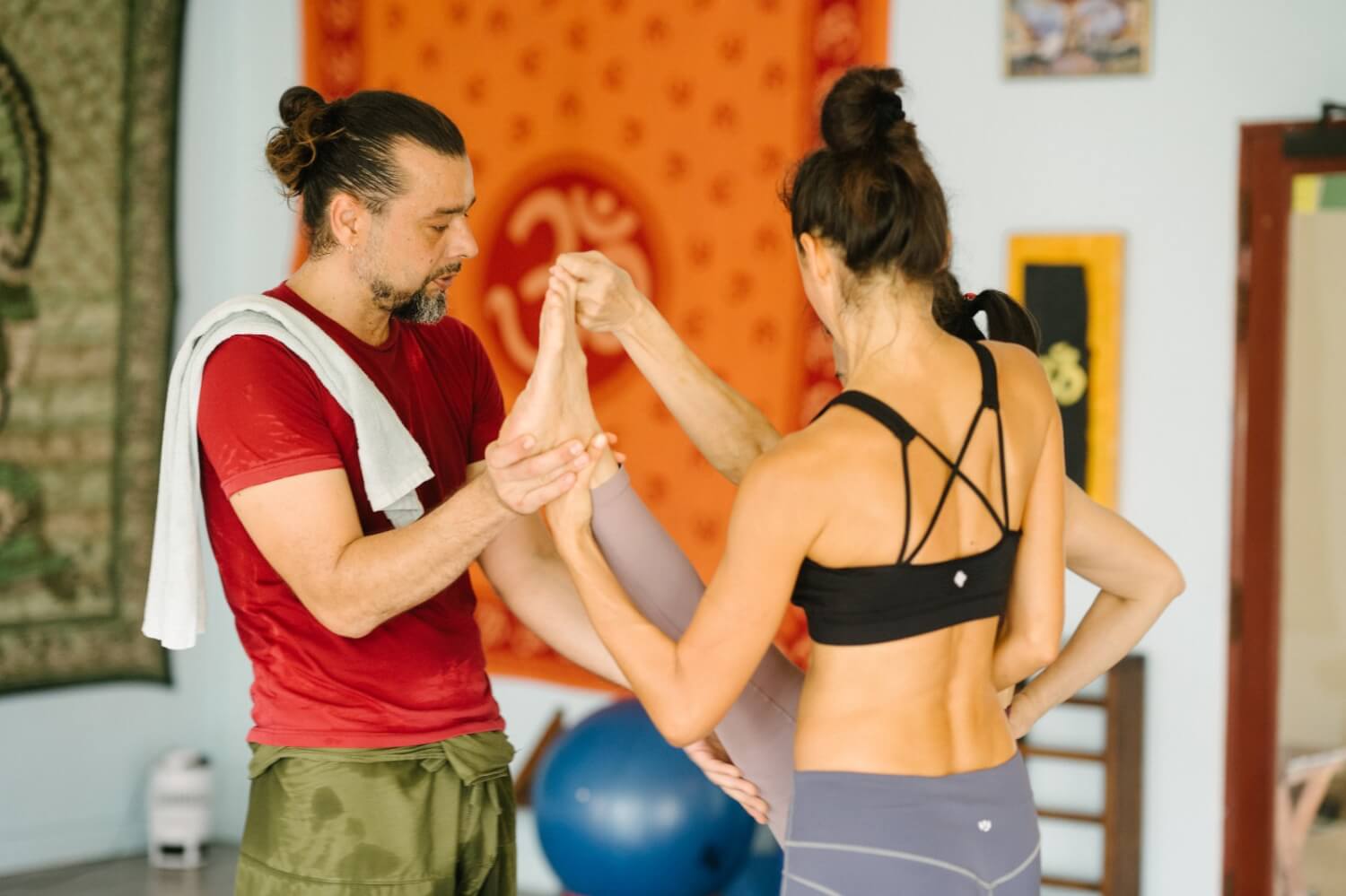 TTC which takes one month and where you get detailed knowledge of all aspects of teaching beginner and experienced Ashtanga Yoga practitioners. 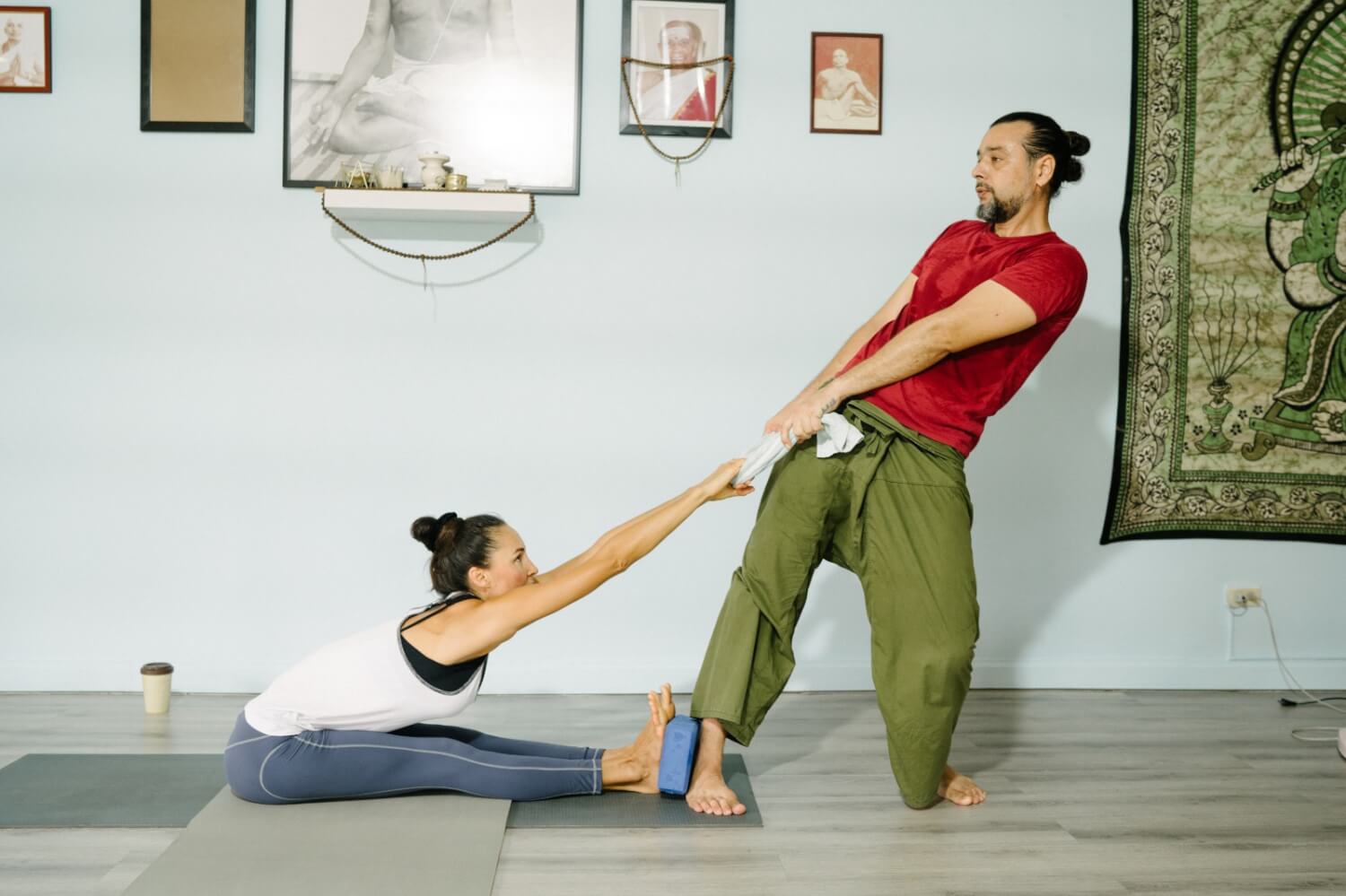 Being able to adjust yoga postures is a unique skill and it requires special qualification.

These eight limbs are interdependent and every stage of yoga makes way for the next higher stage. The boundaries and obstacles can not be previously known and they can be only known with direct personal experience. The eightfold path is designed to lead the practitioner consistently to the final limb called “Samadhi” which is the realization of higher consciousness or true nature of Self.

For most of people it is necessary to go ahead step by step, beginning with the practice of Yama, Niyama and Asana.

Hatha Yoga Pradipika states “Prior to everything, asana is spoken of as the first part of hatha yoga. Having done asana one gets steadiness of the body and mind; diseaselessness and lightness of the limbs.” It is therefore advised for the yoga practitioner to start the yoga path with Asana.

Ashtanga vinyasa yoga means the method of asana practice where the foundation of the practice is linking the breath and the movement (vinyasa).

There are three points of attention in the system called “Tristhana” (“tri” means three and “sthana” means standing place): breathing, posture and gazing point. These three points have to be observed during asana practice continuously. The purpose of vinyasa is internal cleansing and after the body is purified then the nervous system can be purified as well as sense organs.

There are three series in ashtanga vinyasa yoga:

So all together there are six sequences of asanas.

Ashtanga vinyasa yoga equally develops strength and flexibility and due to fixed sequences helps to develop a great discipline and brings the practitioner to overcome weaknesses physically and mentally. There is a great emphasis on self practice as it is considered to be the best way to make asana practice truly meditative.

In the tradition of Ashtanga Yoga there is a lineage of transmission of the yoga teaching. Parampara literally means “from one to another”, it is a chain of uninterrupted transmission and empowerment from teacher (Guru) to disciple (shishya). 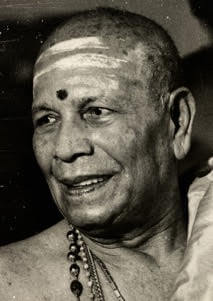 Sri K. Pattabhi Jois (Guruji) is a founder of Ashtanga Vinyasa Yoga. He was born in a Bramin family in Kowshika which is around 150 km from Mysore in Karnataka state in India. At the age of 12 he attended the demonstration of Sri T. Krishnamacharya – one of the most distinguished yogi of 20th century. Being so impressed with Sri T. Krishnamcharya`s demonstration he came to him next day asking to become his student. After some questioning Sri T. Krishnamacharya accepted him as a disciple and Sri K. Pattabhi Jois was his student for 27 years.

After Bramin thread initiation Guruji secretly left to Mysore to study in Sanskrit college where his teacher Sri T. Krishnamacharya took a position to set up a yoga program at Jaganmohan palace. In 1937 Guruji started to teach yoga in Sanskrit college and established a first yoga department which he was directing until his retirement in 1973.

He married Savitrama lately known as Amma (mother) in 1933. They had three children: Manju, Saraswati and Ramesh.

In 1948 Guruji established Ashtanga Yoga Research Institute in their small house in Laxmipuram which is located in the suburb of Mysore. He was teaching there local officials, policemen and even local physicians were sending him their patients as he could help with treatments of some diseases.

In 1964 Guruji built the extension for his house that more people could come and practice at his place. Same year a Belgian with a name Andre Van Lysbeth arrived to the AYRI and practiced with Guruji for two months. After some time Andre Van Lysbeth wrote a book called “Pranayama” where he described his experience with Sri K. Pattabhi Jois at AYRI and that`s how Guruji was introduced first to Europeans.

Also he was travelling with Sri T. Krihsnamacharya and Amma throughout India giving demonstrations, lectures, debating with scholars. More people got to know Ashtanga method and Guruji was invited to travel to teach abroad. His son Manju, daughter Saraswati and grandson Sharath used to assist him in demonstrations and teaching yoga.

In 2002 he moved his Shala to Gokulam a suburb of Mysore which is still operating under the direction of his grandson R. Sharath. Sri T. Krishnamacharya is one of the most significant yogis of 20th century, he is considered as grandfather of modern yoga. During more than one hundred years of his lifetime he was bringing life back into dying world of yoga and revolutionize it for a modern world.

He was born in the village of Muchukundapuram, Karnataka state. His parents named him after Lord Krishna, one of the incarnations of Lord Vishnu. Krishnamacharya`s lineage can be traced from 9th century yogi Nathamuni, a saint in South India who composed texts called Yoga Rahasya and Nyaya Tattva. Krishnamacharya started his education under the guidance of his father who was a great scholar. At the early age he started to study Vedas and other religious texts. His father passed away quite early when Krishnamacharya was ten years old.

Once he was advised by one of his teachers to meet a great yogi in Himalayas to deepen the knowledge of yoga. Krishnamacharya took a long and dangerous trip to Tibet to the lake Manasarovar where he met his Guru Rama Mohana Brahmacharya who lived in a cave with his wife and three children. He stayed with his Guru for more than seven years and during that time he developed his most remarkable skills.  Rama Mohana Brahmacharya made him memorize the entire Yoga Sutras, Yoga Korunta and other sacred texts. The lost text of Yoga Korunta contained information about asanas, pranayamas and how to adopt them to different individuals and their specific needs. After almost eight years his Guru said: “I am happy with your educational progress. Now go back to society, lead the life of a married man and spread the message of yoga. This is the Guru Daksina (payment to the teacher) I want for what I have taught you.”

Krishnamacharya followed instructions of his Guru, he got married and had six children, also he dedicated his life to yoga, spreading the teaching of yoga and promoting it across India.

In 1931 he was offered by Maharaja of Mysore a position in Sanskrit college in Mysore to set up a yoga program there.

In 1950 Krishnamacharya and his family moved to Chennai.

Sri T. Krishnamacharya was a master of yoga, a scholar, Ayurvedic physician. He was a teacher of famous yogis of 20th century such as Indra Devi, Sri K. Pattabhi Jois, B.K.S. Iyengar, T.K.V. Desikachar etc.
Krishnamacharya`s approach to yoga teaching was changing over the time. During the years in Mysore palace he was mostly using Vinyasa Krama method and always adjusting the practice to the individual needs of the students. In the Yoga Sutras Patanjali offers to choose right tool and integrate that tool into student`s practice taking in account needs, abilities and situation. Nathamuni`s Yoga Rahasya also personalizing student`s practice according to time, place, age, activity, capacity, sex. Krishnamacharya`s approach was teaching what is appropriate to each individual.

After Sri T. Krishnamacharya passed away at the age of one hundred his later teachings continue to be taught by his son T.K.V. Desikachar and his grandson Kausthub Desikachar in Chennai, India.

Go to Top
Chat with us on WhatsApp ;)
Start a Conversation
Hi! Click one of our members below to chat on WhatsApp
We usually reply in a few minutes