The subtle energy of your food becomes your mind 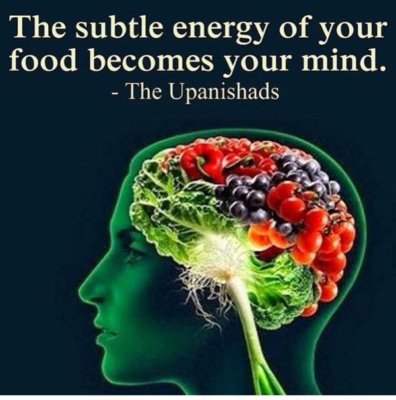 There is a very illustrative story we found and wanted to share with you (below). The message here is that we are very effected by food we take. We may not notice that and not feel it so much, but if we wish to purify our body and mind and progress on the path we need to be more aware of what are we eating.

Every product we consume has not only nutritional qualities but also a subtle vibration so it is tremendously important for both our physical and mental health that we consume healthy, energy giving food that has a pure, positive vibration. And may be before we eat we should find out where the food has come from and what qualities it contains as it has a marked effect on the body, mind and our spiritual energy. These vibrations can considerably alter our physical well-being, our thoughts, feelings and vitality. It very easy to understand about food when we ask ourselves a simple basic question: “Is the food I am eating connected with the pain, suffering or death of any living being?”

Daily, hundreds of thousands of animals are cruelly slaughtered for consumption. Apart from the fact that meat is detrimental for our physical health it is extremely harmful for our consciousness and has serious karmic consequences. If we are taking a yoga path we need to realize about the karmic consequences of killing animals, and also the danger to their health caused by the consumption of meat (a fact which nowadays is undeniable, with the spreading of animal diseases such as BSE, Foot and Mouth Disease, Swine Fever, etc., and also the feeding of antibiotics and hormones to animals).

Together with the meat that we consume we absorb the vibration of the fear of death, the pain and the despair of the animal. This fear sinks into the subconscious and comes to light again in our dreams and meditation. How subtly the food works can be seen in the following story:

“A Yogi lived in a little hut outside a village and each day the villagers provided him with a meal. In the village lived a thief who also wanted to gain the blessings of the Yogi, so one day he went and offered the Yogi a meal. But the Yogi refused to accept anything from him. Hurt, the thief left and changed his plan. He then instructed the owner of a café to prepare and deliver a midday meal to the Yogi, for which he paid. The owner carried out the instructions and the Yogi ate the meal not suspecting that the thief had paid for it.

During his evening meditation a very peculiar thought suddenly arose in the mind of the Yogi. He had a compulsive desire to acquire the gold statue of Krishna from the temple. The longing for it was so strong that in the middle of the night he crept into the temple and stole the statue of Lord Krishna. But he was observed by the guard who immediately ran into the village and sounded the alarm.

The Yogi ran as quickly as he could down towards the river with the golden Krishna under his arm. He jumped into the water – and then abruptly stopped. The cold water had brought clarity to his confused thoughts and he became conscious of just what he had done, and of the awkward situation he now found himself in as the villagers approached him shouting angrily.

With great presence of mind the Yogi decided on a ruse. He acted as though he were performing a Pūjā . As his pursuers approached they saw what appeared to be a ritual bathing of the form of Krishna with the Yogi chanting Mantras. This calmed them down and afterwards they returned with the Yogi to re-instal the statue in its rightful place.

It was completely incomprehensible to the Yogi how his mind was able to have become so confused. Then it occurred to him to ask the man who had brought him his last meal. He called him and questioned him about where the food had come from. This person then admitted that the thief was the true donor of the meal. Now the Yogi was clear about where the desire to steal had come from. The vibrations of the thoughts of the thief were in the food and it was in this way that they had been transmitted to him.”

“The subtle energy of your food becomes your mind.” The Upanishads

YOGI FOODS TO ENJOY
November 1, 2015
Go to Top
Chat with us on WhatsApp ;)
Start a Conversation
Hi! Click one of our members below to chat on WhatsApp
We usually reply in a few minutes